Blowing in the Wind: The Artistry and Engineering of the Barn’s New Weathervane 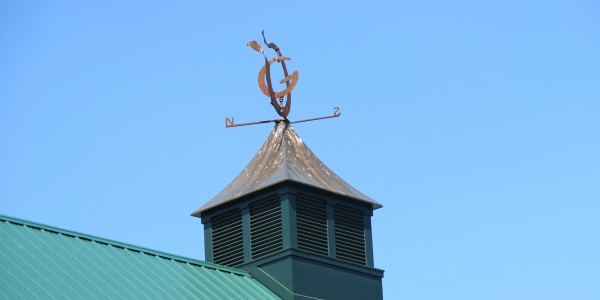 After you go to all the trouble of building a barn by hand—from cutting every last joint to raising it by hand, resulting in a structure that will last for generations—you really can’t crown it with some made-in-China, mail-order weathervane. That would be like Alice Waters plating up Twinkies for dessert at Chez Panisse. It just wouldn’t be right.

“I wanted to have something unique up there, rather than the conventional rooster spinning around,” says Board Member Jeff Young, who steered the barn project from start to decorative finish. “Gaining Ground is a pretty special place, so I thought we should have something special up there.”

The custom-made weathervane perched atop the cupola represents the two Gs from Gaining Ground’s logo, each spinning independently of the other in the wind. The design resulted from a creative collaboration between Jeff Young and Ted Tucker, a blacksmith (and engineer, sculptor, watercolorist, poet, and woodworker) who lives down the road in Lincoln. He was eager to join the effort as soon as GG’s program manager, Fan Watkinson, lobbed the idea to him. “Fan came to me and said, ‘I’ve got a project, but you probably can’t do it,’” he says. He was sold.

Ted brings his NASA engineering background into play in the blacksmith shop when, for example, determining how a weathervane that weighs about as much as a bag of cement would be supported on the roof and withstand a New England hurricane. He also solved the design challenge of how each of the two Gs could rotate independently without adding a spindle through the center, which would have resulted in something that looked less like a G and more like the cent symbol. (Not quite the right message to broadcast from an organization that gives its goods away for free, right?)

Among many other insights along the way, Jeff contributed his structural engineering experience, which was handy when it came time to heave the thing up a ladder and over the steep tin roof to mount it. “This happened to be my avenue of expertise,” Jeff says. Plus Ted had discovered a way to install it in two parts, which meant they didn’t need a crane or lift to do the job. “It made my life safer, and I’m still alive because of him,” Jeff says.

The final product is a work of art and engineering, much like the barn it crowns. “It was a lot more work, and more effort, but I think the end result is completely unique. The whole experience, you just can’t buy it,” Jeff says. “I really enjoyed that.”

Of course, both timber-frame construction and blacksmithing have been serving and supporting humankind since early, early days: A timber-frame building was found among the remains of the eruption of Mount Vesuvius in 79 AD, for example, and Hephaestus was the blacksmith of the Gods in Greek and Roman mythology. Gaining Ground’s new barn, from tip to foundation, celebrates the modern application of these ancient traditions, as central to the human experience as the practice of growing food to sustain life and build community. That never seems to go out of date.

Come visit, and see it in action for yourself. 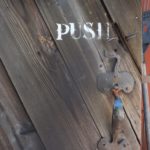 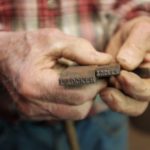 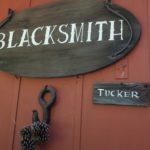 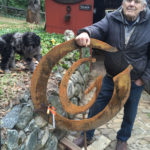