March 31, 2020 • Doug Wolcik, Farm Manager
In 2016 we started with a vision of making the farm more productive, and over the last four years we have reimagined and reconstituted almost every system and aspect of our farming practices. The driving force behind all these changes was the long-term plan of regenerating the soil, along with a switch to no-till farming. We believed […]

A Gold Mine of Veggies for Our Silver Anniversary

March 29, 2020 • Allison Goodwin, Program Manager
Gaining Ground’s 25th growing season was a resounding and record-breaking success. In 2019, our hard-working farmers grew 126,275 pounds of organic produce with the help of more than 2,500 volunteers. Our production volume increased 27 percent over 2018 and doubled 2016’s total output. More impressive than these numbers, however, is their impact on our recipient’s […]

Change is a Constant on the Farm

March 21, 2020 • Elisabeth Elden, Board President
To work on a farm is to expect change of all kinds, some that we create on purpose, and some that are mysteries that unfold and surprise us throughout the year. We are subject to the weather, yet we design schedules and plans for planting and harvesting crops. We study and ameliorate the soil, then […]

March 19, 2020
If you are seeking an hour of distraction from current news, here is your chance for an informative podcast. https://www.notillgrowers.com Farm Manager Doug Wolcik tells the story of Gaining Ground and its transition to no-till farming on this highly respected podcast, No-Till Growers. Enjoy Doug’s interview, posted on March 16, and those of so many other […]

Farm to Table, Farm to Community

October 28, 2019 • Fan Watkinson, Program Manager
For twenty five years, Gaining Ground has pursued its mission to grow and give away healthy produce for hunger relief with the help of volunteers and community. While the mission has been steadfast, the chapters along the way have evolved. During the past seven years, we have focused on increasing output on our 3.5 acres of cultivated land by […]

• Tim O'Brien, Assistant Grower
I began working at the farm in late June, just after a killdeer nested in the leeks and fledged two chicks. Great-crested flycatchers occupied the woods surrounding the far field. One of my favorite things about farming is being more in tune with changes in the seasons and the weather and how they affect the […]

• David Salomón Saléh
For the first time in years, Gaining Ground collected over 50 pounds of honey from our bee colonies this summer. Do you know how amazing that is?! The production of honey requires complex processes, and now bees face the additional challenges of highly toxic pesticides and extreme weather.

July 25, 2019
On July 14, NOFA/Mass held a Soil Health Field Day in collaboration with Gaining Ground in Concord Mass. It was the first of six on-farm workshops to be held over the next three years as part of a project entitled “Organic No-Till on Northeast Farms […]

July 8, 2019 • Caro Roszell, NOFA Education Director
On Sunday, July 14, Doug Wolcik will give an interactive field tour exploring the systems he has instituted to drastically increase production—without increasing field space—on Gaining Ground’s three-acre farm. He will be joined by Daniel Mays of Frith Farm, an innovative, no-till commercial farm in Maine. The farmers will offer comments, observations, and demonstrations of […]

This year, a variety of organizations have reached out to the Gaining Ground farmers to learn more about their farming systems and to include them in various activities. They have participated in publications, podcasts, farm tours and even community cooking contests!  In March, Gaining Ground was included in the UMass Extension Vegetable Notes with a photograph […]

July is a busy month for Gaining Ground with both a field day and afternoon farm tour to learn more about no-till farming practices. September brings our Community Harvest Celebration followed by our Ride for Food in early October. We welcome all to join us. For more details about each […]

The Practice of Growing

April 18, 2019 • Doug Wolcik, Farm Manager
I love growing inside hoop houses! Compared to the unpredictable environment outdoors, growing inside gives us a season we can count on. Presently we have two hoop houses, where we can control temperature, humidity, and moisture. Among other things, this means we have unfrozen soil to dig our hands into for our first plantings of […]

• Fan Watkinson, Program Manager
Between April and December 2018, we donated a record 99,000 pounds of organic produce to our twelve hunger-relief partner organizations. By gradually improving our soil, infrastructure, and farming practices with investments in irrigation, fencing, personnel, and shelters, we have raised production almost 300 percent—up from 34,000 pounds in 2013. This is a wonderful by-product of […]

November 19, 2018 • David Salomon Saleh, Gaining Ground Beekeeper
In 2018, Gaining Ground hosted two new bee colonies purchased from beekeepers located in Western Massachusetts. The colonies arrived in late May and mid June and we named them Autumn and Warm.  The colonies faced multiple threats this year. In July they encountered a bacterial disease that took control of their brood and affected their population […]

Leadership in the Field

November 13, 2018
Gaining Ground’s no-till practice is garnering attention: the organization is one of nine organic farms selected to participate in a three-year USDA Conservation Innovation Grant. The $170,000 grant was awarded to Northeast Organic Farmers Associations (NOFA) of Massachusetts, Connecticut, and New Jersey by the USDA Natural Resources Conservation Service. “The goal of the project is […]

November 2, 2018
Board member Linda Booth Sweeney received a poignant piece by Wendell Berry from Schumacher Center for New Economics, with its mission to envision a just and sustainable global economy; apply the concepts locally; then share the results for broad replication. This writing seems relevant to the work at Gaining Ground while we address hunger relief. A culture […]

August 9, 2018 • Rob Carter, published in Concord Journal 8/7/18
As guests peruse items at the Rosie’s Place food pantry in downtown Boston, the odds are good that the fruits, vegetables and herbs they’re choosing from were grown in Concord. Gaining Ground, a nonprofit organic farm on Virginia Road, is in its third year of providing fresh produce to Boston’s longest-running women’s shelter. “It’s a […]

Race to the Start

May 17, 2018
The holidays have come and gone and, after a very successful 2017, where we saw production increase to over 80,000 pounds, we now reflect and set a course for our next season. Winter is the season for planning. How do we achieve these results again or, better yet, how do we continue to grow more […]

It is magical to watch the ebb and flow of farm activities throughout the season and the improvements in production annually. Last year was a big year from beginning to end. In 2017 we donated the most produce in five years and, for the first time, we distributed every month, January through December. Thankfully, our continually […] 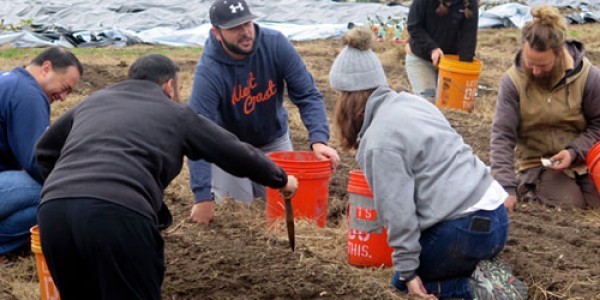 In the Present Season

October 17, 2017
As the growing season starts to wind down, I start to get excited about the winter months and the planning process for next year’s growing season. I can’t help myself. As a farmer, it is so ingrained to always be thinking two days, two weeks, even two months ahead at any moment. But on days […]
1 2 Next »