One for the Record Books

May 3, 2021 • Allison Goodwin, Program Manager
Gaining Ground’s 2020 growing season was memorable for many reasons. A pandemic altered our lives and behaviors forever. Food insecurity skyrocketed, both in Massachusetts and across the nation. Our caterpillar tunnels were damaged by a microburst storm in April, and we reluctantly suspended our volunteer program for the first time in the organization’s 26 year […]

Growing Community Together with the Greater Lowell Community Foundation

• Christine Savage, Communications Manager
Last March, as the pandemic swept across the country, it didn’t take long before the folks at the Greater Lowell Community Foundation (GLCF) started to hear stories of people in need of personal protective equipment—gloves, masks, hand sanitizer. So they set to work creating an emergency fund for grants to address these new needs, and […]

The Measure of a Year

• Jennifer Johnson, Executive Director
“Five hundred twenty-five thousand six hundred minutes.How do you measure,Measure a year?” Musical theater buffs may recognize the lyric above from Rent and a song that explores how one defines the truly important events that occur during the course of a year. The Tony award-winning play celebrates its 25th anniversary this year, and multiple casts have […]

October 29, 2020 • Elisabeth Elden, Board President
First and foremost, the board thanks everyone who made our year on the farm one of the most productive in our history. Despite some unexpected and challenging issues, we delivered over 440,000 servings of food and grew more than 110,000 pounds. Just a sampling of our challenges included COVID-19, which forced us to suspend our […]

• Allison Goodwin, Program Manager
Our newest recipient partner is the East Boston Community Soup Kitchen, which provides meals and groceries to those struggling with food insecurity, homelessness, and other challenges in East Boston. Our program manager, Allison Goodwin, recently interviewed the Kitchen’s founder and executive director, Sandra Niijjar, about her mission to feed her community. Sandra is second from […]

September 15, 2020 • Allison Goodwin, Program Manager
Partnerships are a vital component of Gaining Ground’s success. It is through our long-standing relationships with local hunger relief organizations that the nutritious bounty of the farm reaches thousands of our underserved neighbors each season. In response to skyrocketing food insecurity associated with the COVID-19 pandemic, we entered into several new partnerships this spring. GreenRoots […]

Keeping up with Demand

August 5, 2020 • Jen Flint, Board Member
As food insecurity surges, hunger relief organizations adapt to keep up “The numbers are staggering,” Erin Kuschner writes in a June 26 article on Boston.com.  Food insecurity could affect one in eight residents of Eastern Massachusetts by the end of the year, according to the hunger relief organization Feeding America. That represents an increase of […]

July 29, 2020 • Allison Goodwin, Program Manager
This year has brought plenty of unforeseen challenges as well as growth, re-calibration, and hidden blessings. The COVID-19 pandemic in early March forced some of our largest partners, such as Boston’s Pine Street Inn, to temporarily stop accepting produce from Gaining Ground due to safety and logistical concerns. While some channels closed, other new partnerships […]

May 1, 2020
We donated 60% more produce this April compared to a year ago, thanks to two additional hoop houses providing warm shelter for more early spring crops. With the current pandemic, this increase has been well timed. At a time when fresh local vegetables are scarce, Open Table in Maynard and Concord Public Schools have gratefully received […]

Farm to Table, Farm to Community

October 28, 2019 • Fan Watkinson, Program Manager
For twenty five years, Gaining Ground has pursued its mission to grow and give away healthy produce for hunger relief with the help of volunteers and community. While the mission has been steadfast, the chapters along the way have evolved. During the past seven years, we have focused on increasing output on our 3.5 acres of cultivated land by […]

April 18, 2019 • Fan Watkinson, Program Manager
Between April and December 2018, we donated a record 99,000 pounds of organic produce to our twelve hunger-relief partner organizations. By gradually improving our soil, infrastructure, and farming practices with investments in irrigation, fencing, personnel, and shelters, we have raised production almost 300 percent—up from 34,000 pounds in 2013. This is a wonderful by-product of […]

November 2, 2018
Board member Linda Booth Sweeney received a poignant piece by Wendell Berry from Schumacher Center for New Economics, with its mission to envision a just and sustainable global economy; apply the concepts locally; then share the results for broad replication. This writing seems relevant to the work at Gaining Ground while we address hunger relief. A culture […]

The Progress and Power of Gaining Ground

October 9, 2018 • Polly Keller Vanasse, Board Member
Gaining Ground drew me to Concord. For 20 years, I brought my students from Nashoba Brooks School to volunteer in the garden and consequently viewed the program through a seventh-grade lens. Some responded to the sheer physicality of the work, some marveled (or screamed) at worms in the soil, some became passionately enraged about childhood […]

• Amy Capofreddi, Executive Director
On a beautiful fall morning, more than 350 bikers from all over eastern Massachusetts arrived at Nobles and Greenough School to fight hunger by participating in the Three Squares New England Ride for Food. Started in 2012, this 10- to 50-mile cycling event has raised more than $1.6 million for the benefit of its 18 […]

August 9, 2018 • Rob Carter, published in Concord Journal 8/7/18
As guests peruse items at the Rosie’s Place food pantry in downtown Boston, the odds are good that the fruits, vegetables and herbs they’re choosing from were grown in Concord. Gaining Ground, a nonprofit organic farm on Virginia Road, is in its third year of providing fresh produce to Boston’s longest-running women’s shelter. “It’s a […]

Hunger Relief from the Ground Up: Secret is in the Soil

At the end of March, Gaining Ground hosted an interdisciplinary panel focused on the issue of hunger relief. In a community like ours, hunger might not be obvious, but here are the numbers:

We had a full crowd join us for an evening of discussion about food security, human health and one of the most surprising levers for positive change: the soil beneath our feet.

END_OF_DOCUMENT_TOKEN_TO_BE_REPLACED

May 17, 2018
It is magical to watch the ebb and flow of farm activities throughout the season and the improvements in production annually. Last year was a big year from beginning to end. In 2017 we donated the most produce in five years and, for the first time, we distributed every month, January through December. Thankfully, our continually […]

A Match Made in Concord

Say the words “food pantry,” and most people think of canned vegetables and boxes of pasta. But more and more, a large portion of the food that pantries give out is fresh and local. So when Open Table’s community dinner and food pantry looked to expand their fresh food offerings, naturally they looked to Gaining […]

Hunger Relief from the Ground Up

Gaining Ground presents: Hunger Relief: From the Ground Up Thursday, March 29, 2018 • 7 p.m. The Fenn School—Ward Hall • 516 Monument Street • Concord, MA 01742 Please join us for an evening of discussion about food security, human health and one of the most surprising levers for positive change: the soil beneath our […] 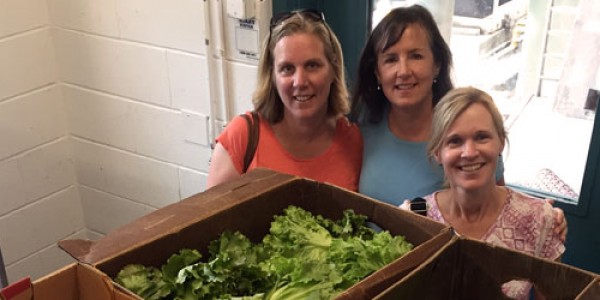 August 23, 2017
At the beginning of the summer, Gretchen Nelson, head of the board’s Recipient Committee, and I scheduled visits to the amazing organizations that distribute our produce. With growing season in full swing, seeing our vegetables filling tables, shelves, and bags was clearly going to be powerful. I had been told that our produce is often […]
1 2 Next »