In 2018, Gaining Ground hosted two new bee colonies purchased from beekeepers located in Western Massachusetts. The colonies arrived in late May and mid June and we named them Autumn and Warm.

The colonies faced multiple threats this year. In July they encountered a bacterial disease that took control of their brood and affected their population for a full month (indicated by the black arrow in the chart above).

After recovering from this brood disease, varroa mites started to breed in August. Thanks to Gaining Ground’s participation in the Massachusetts Department of Agriculture and UMass honey bee health survey this year, we detected four strains of viruses: DWV- Deformed Wing Virus, LS2V- Lake Sinai Virus 2VDV -Varroa Destructor Virus IAPV-  Israeli Acute Paralysis Virus. All of them started to replicate very quickly through the mite population in August and September (see charts). Varroa Destructor Virus (VDV) was the predominant strain of the virus detected. After receiving the report, I treated the hives with a natural treatment, successful in controlling the mites. 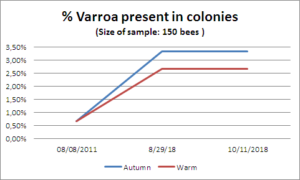 Finally, an unexpected event occurred in October when the farmers discovered that the hives had been knocked down by some force. Based on the scene after the toppling, wind and wild animals are unlikely, so it remains a puzzling mystery.

The good news is that none of these threats were enough to kill the bees. With proper care and management, they recuperated and continued pollinating the farm’s crops and native plants. The bees did it, they made to winter! 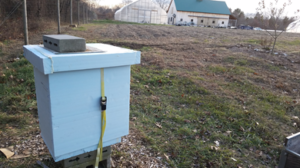 Now they will face the most stressful moment of the year:  winter. To increase the chance of overwintering, I have designed an insulation box. It looks and works like a refrigerator but it is just a box. This will help the bees keep warm so they spend less energy maintaining the cluster at its required 95 degrees when it may be below freezing and snowing outside. Also, inside the hive cover, on top of the colony, wool material will help control drastic temperature changes around the cluster. It will also help with moisture condensation.

In January 2019, Gaining Ground will receive a pesticide analysis that will help us to understand better the current situation of pesticides in the farm’s neighborhood. A breakthrough piece of research from Harvard has shown neonicotinoid pesticides, the most commonly used class of pesticides in agriculture, have profound effects on the social behaviors and therefore survival of bee colonies.

It has been a rewarding experience to take care of the bees and support Gaining Ground’s mission and excellent work. I really hope that colonies are able to survive the winter.

Farm Update, Tales From the Farm