Getting Our Hands Dirty 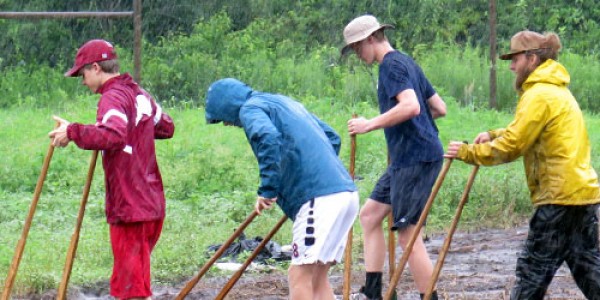 Farm Team is a program within Gaining Ground that brings together local high school-aged kids who have a genuine passion for being outside and getting their hands dirty. We hope to assist the farmers with the greatest amount of work possible. This means heading out to the farm every Tuesday and Thursday from 9:00 am to noon, rain or shine, throughout the summer.

This year’s team reached a record high in participation that generally didn’t dwindle. Every week, we had about six able-bodied high schoolers ready to do whatever chores the farmers had on their list. Although six may not sound like an impressive number, the kids that volunteered were a committed group and the amount of work accomplished was pretty amazing.  One day Doug asked us to weed and prepare a bed for planting. In three hours, not only had those tasks been accomplished but all the plants were in the ground, hay had been spread in the paths, and wire hoops were set up for a bug screen. We were tired but proud of our tangible accomplishments and happy that we were able to make Doug’s job a little bit easier.

The biggest reason for Farm Team’s success this summer was actually a simple one: We liked what we were doing. Even when there was a less desirable task, it was easy to get a conversation going to get our minds off the work. Because we are all high schoolers, we found we could relate to one another in many aspects of our lives. Our talks would often be group venting sessions about the college process or weekly debriefs of what happened on the latest episode of Game of Thrones (of which, we discovered, Doug is a huge fan).

With the start of school in September, Farm Team will sadly be winding down and with it, the need for us to spend significant amounts of time scrubbing dirt out from underneath our fingernails. That’s the only part of Farm Team we won’t miss.

Fall, Tales From the Farm, Volunteers