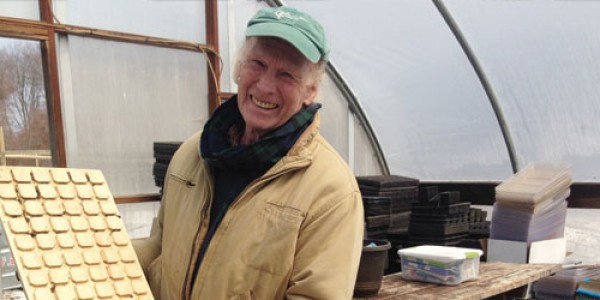 Gaining Ground volunteer David Outerbridge always has an eye open for time-consuming tasks. He wants the farmers to be free to give their full attention to growing produce and working with volunteers. So, after years teaching high school English, followed by a restless retirement teaching continuing education in Newton and tutoring international students at UMass Boston, David has discovered he is happiest when removing obstacles to the smooth operation of Gaining Ground—especially if a physical challenge is involved.

His volunteer work with GG began ten years ago when he helped erect the first hoop house. He showed up again to roof the sugarhouse, to split wood, and to mow around the beds. Now he is a regular presence at the farm. He is the one you might have seen digging and mowing to keep the deer fence clear of invasives. He arrives before the farmers do, looking for ways to make things work more smoothly. He noticed how difficult it was to get maple sap from the barrel in the truck into the boiler in the sugarhouse and built stairs to facilitate the process. He built tables for the greenhouse and for washing produce. When he can’t get to the farm, he is in his workshop in Newton making things like the wooden produce boxes for easy pick-up by recipient volunteers. He made the tiny wooden gizmos pictured here, which enable the farm managers to standardize the growth of seedlings.

Last summer, when an enormous maple fell in a windstorm and hung on the fence threatening to take out the squash harvest and no one had a chainsaw handy, David searched for a used saw and donated it to the farm. He then used it in what Doug, one of our Farm Managers, called “a few Clint Eastwood–like maneuvers” that saved almost all the squash plants. Farm Managers Doug and Kayleigh call David an inspiration. He sees what needs doing and does it.